One of my favourite little graffiti conversations is etched above the urinals at the Union Club. It warms my heart every time I read it:

"How many peas does it take to change a lightbulb?"
"None, they don't have any arms."

Not really, it's just the way they're made 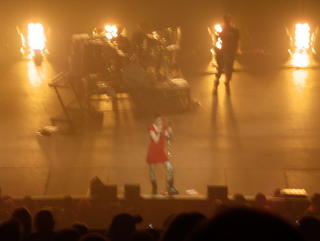 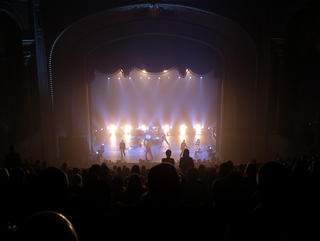 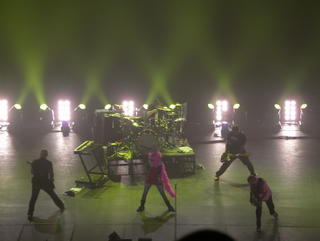 Posted by skander at 4:14 pm No comments:

The Trouble with Auntie

I'm not quite sure what the ABC is up to lately. It's the Saturday and Sunday night line-ups which have me puzzled. The old Sunday night in with Auntie is a long established tradtion in my household—well, it was when I was a kid, and it is now that I am a conservative old man. An old man who shakes his head in wonder that what on earth Mark Latham thinks he's achieving with all this bile; and the same goes for Robert Doyle and his spectacular policy launch last week; and for those New Zealandish voters; and, and I'll stop now.

The way I see it is grey-haired types stay home with a certain amount of regularity on a Saturday night. Agreed? Whereas, plenty o' people of all ages stay home on a Sunday night, what with work eating into our Mondays.

So the ABC gives us Midsomer Murders of a Saturday night. Fine. My grandmother will happily sit down with a stable-table and a boiled egg to sigh about how wonderful the old days were and reminisce about the verdant joys of a village life she's only ever dreamed of, where there was nothing untoward about two ladies co-habiting, the vicar rode a bicycle and red lipstick was considered garish (and red shoes too, for that matter). Nothing new there.

And on Sunday night, my parents, who are only just starting to grey, get all het up over New Tricks, about a quartet of grumpy old has-beens (both as actors and characters) including a feisty, muttony Alison Braithwaite, solving cases. The attraction here is that the characters in this TV show are slightly older than my olds, so they can sit there with their Sunday night boiled egg and guffaw at the old klutzes, thinking "thank christ we're not that old yet!" Nothing new there—onscreen, or off.

Recently, this has been followed by Canterbury Tales. My mother doesn't even get Canterbury Tales. "It's, like, Chaucer, mum. Surely you read this when you were at school. It was published around then." But no, it's the washing up and an early night for them after New Tricks.

The common denominator of this is that the audiences for both programs enjoy a boiled egg while they watch. They are old people. And these shows are on different fucking nights. Who on earth in the programming department deep in the bowels of Ultimo (it can't have been anything but some vogue-ish Sydney decision) decided that it would be fun to stretch the gerry programs over two nights, and follow them—each of them—with shows that younger people can relate to? Nay, can sit in front of with a pizza and still go "cool", or "phwoar!" or even just "what's this then?"at?

So, why doesn't Auntie program New Tricks to follow Midsomer Murders—that way, the boiled-eggers of this world could have a jolly good night in with a few chuckles and "I don't mind if I do have a little whisky before bed, it is Saturday night after all". While those of us with less, let me say, quintogenarian tastes, could stretch out on the couch with a nice little reefer, a vegetarian with hot salami and a cleanskin red, in front of Hustle, followed by Canterbury Tales. That way we get 2 hours of quality entertainment, each of us, on our respective nights. And never the twain shall meet.

OK, so all of this is because I was actually in on Saturday night, and caught Hustle again. And it rekindled my weak-at-the-knees crush on Jaime Murray: 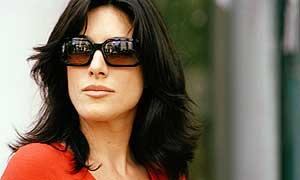 Phwoar.
Posted by skander at 3:01 pm No comments:

Out of Colac by way of Erinsborough

How awesome are Janelle and Janae Timmins, then?
Posted by skander at 2:16 pm 1 comment:

Why I Love British Newspapers #13

The Sun was thankful for a guerns to the stylish nuptials of Jordan and Our Peter Andre .
Posted by skander at 1:14 pm No comments:

I want to be a part of BA, Buenos Aires' big apple

I'm going to be spending 5 days in Buenos Aires at the end of the year. At which of these hotels do you think I should stay?Decisions, decisions.
Posted by skander at 2:39 pm No comments:

Saturday night, eh? Ended up hitting this Japanese restaurant that I've been a-hankering for for quite a while. Well, since I read a review about a year ago, and then discovered the place the old-fashioned way—that is, by walking past it—last week. It's all stick-ey, like yakitori-yum, with heaps of different varieties, so that the squid yaki came out wrapped round in a big circle, looking like some awesome white lollypop. Yum. And there were nasu dengaku ones and oh, I'm getting hungry just thinking about it. And then delicious thick white fish sashimi, and other mouth-watering pieces of tenderness. All preceded by lychee martinis and washed down with Tsing Tao. Not bad for an evening which began with a "what's up?" phone call at 7:45pm.

So the locals ended up grabbing a cab home together from outside the Metro. While we're waiting, and this dude starts talking to us. He was looking for a cab too, and talking about all sorts of shit, kinda making three-quarter sense, about how he's an engineer and is spouting off all this stuff about the energy consumption of public transport. OK, seems like a nice-enough bloke. Then he decided to that he'd hail our taxi for us, which he cocked up, and so decided we should share his ride. Him to Fitzroy, us to NM. Hmm. Brunswick street wasn't too far out of our way, and he said he'd pay. He was pretty insistent, but seemed like an alright bloke, he didn't smell, wasn't cross-eyed, so we said alright. Well, he was in the front seat, so it was hard to toss him out.

And so he's crapping on about working in the mines up in far WA, how he was two months on, two weeks off, and he did it for six years and had a girlfriend the whole time, and then he quit to spend more time with her and it broke up after three weeks. So we're thinking this guy's a bit weird, and he keep saying he wants to go to Easey Street Fitzroy, but Easey's in Collingwood. Meh. I couldn't work out if he was pissed or loved-up or what, but he kept kinda forgetting shit.

Anyway, we get to Brunswick street, and he goes "Oh shit, I'm not going to Easey Street Fitzroy, I'm going to Smith Street Richmond." "WTF?" "Sorry guys, I'll pay the whole way, I've got $20 for the fare, it's ok, we'll just keep going". Um, no we won't. So we're like "Um, driver, can you stop here please", and again with spirit, louder and sterner. And louder and sterner again, until finally Mr Taxi driver stops and we jump out and bid our fucked-up friend farewell, much to his continuing protestations.

Lesson of the week: don't share cabs with strangers.
Posted by skander at 3:37 pm No comments:

Why I love British Newspapers

Last gasp: French kick the Gauloise habit
Gauloises no longer to be made in France. Le pays, as the French do not say, is going to les chiens.

Gauloises, incidentally, are my favoured coffin-nail, en France.
Posted by skander at 1:03 pm No comments: