Leaps and bounds ahead of Tuesdays, in my books. This is what soaps are about—trauma, and the way this affects the relationships between people. This is what Ramsay Street doesn't do well. It is something the British soaps are very good at, getting everyone together for the bubbles of emnity to rise to the surface and create divisions between characters. A la Max and Karl, previously pretty good mates, at each other's throats. I hope they keep this sort of tension going.

And Neighbours was blessed the day they wrote and cast Janelle Timmins: "I've always said that man was a cockroach. He'd survive anything". PURE GOLD.

The only negative aspect to the episode is that Connor survived.
Posted by skander at 2:43 pm No comments:

And so we have seen the last of everyone's favourite JAP, the ersatz Serbo-Australian Serenna Bishop. Yes, after the tumultuous time she has spent in Erinsborough—snapping up the storyline Delta ditched featuring the oddly attractive internet soft-porn-meister, Chris Cousens; heavy-petting her heavy-breathing half-brother; A whole bunch of excuses for her to wear a bikini (whihc we don't mind at all); and well, not really much else. For one thing, at least poor Lara won't have to lock lips with Australia's leading example of premature balding, Connor O'Something Oirish. Perhaps that is the reason why she decided to 'jump ship'.

And so we've seen the end of wanton hussy Ljiljana Bishop and her sap of a huband, dorky Dave—Dave, who's not done much except lose all his cash in his opening weeks, and have one great scene where he finally had a go at his wife for shagging Paul Robinson. Where were all the holier-than-thous when poor Dave got cuckolded, Susan and Lyn? As for Ljil, well, pfft.

What shits me about this aeroplane tragedy, what really shits me, is that off all the characters who have been killed, they are all from the same family, and at least two of them had potential. Why the fuck wasn't Stuart Parker on that plane? Why the fuck did Connor have to survive? He can't even read, he's balding, he's hard to understand, and he's ugly. If I'd had three characters to axe, it would have been Chooka, Connor and Ljiljana, no questions asked. All three of them are superfluous wastes of space in my opinion.

But back on topic: Harold has to be the unluckiest guy in the world. Everyone around him dies. And not just dies, but dies spectacularly. I understand the arguments the Neighbours producers have put around that they wanted some drama, some grief, and a few less characters, but to strip Harold of three of the only four people in the world who are releated to him is altogther too cruel. Why not share the grief around? We could all have done without Dylan, and the Timminses could outmourn any family, I'm sure. Or Bobby Hoyland, even, if we wanna extend the circle. Hell, there's an army out there with its sights firmly set on Lyn Scully—a character with so much potential as the new busybody in my books, and yet gets thrown so little. Surely the Hoylands are due a tragedy? Perhaps it could have been Summer? make that Boyd, he's more of a sap. Wouldn't a whole street in ourning be better than the chance to alter Harold's personality YET AGAIN, this time so he can attempt to murder Paul Robinson?

I dunno. The logic behind the murder of these three characters is beyond me. I saw so much potential in spoilt brat Serena and have held out hope of a hottie Serb family from WA leaving the vineyard to join aunt Ljil, whether she's there or not. And now, no. Although I can still hope to see crazy-eye Sventanka Ristic again, can't I? Can't I?
Posted by skander at 3:44 pm No comments:

Once again the Premiers are barking up the wrong tree. It's not some vague Howardian "shoot to kill" clause—a right most Australian police forces already have—that is the most disturbing part of this so-called "anti-terror" legislation. It's the restrictions on freedom of speech implied in the sedition clauses. The sort of clause that that could have someone who may support the Palestinian struggle against the brutal, illegal occupation of their lands by a foreign military force, 'detained' without charge for up to a year.

And while I'm at it, good on John Stanhope for being the only Labor leader with any spine.
Posted by skander at 12:33 pm 1 comment:

I came by this work for a Brazilian artist called Icasro Doria. It rocks. And there's more. But never enough. I love this sort of shit. It's the type of stuff that led to me having a big stack of COLORS magazines a few years back. Man they were good. My sister still denies nicking them, but she has a history of poking her nose into places and not owning up to it. That's what sisters are for, isn't it?

Posted by skander at 1:26 pm No comments:

Two things that have got my goat this morning:

A cautionary tale from the land of video games and fucked-up violence, from our man in Seoul, The Bee:

This is not a tale for everyone so if you don't enjoy blood and violence better to stop here. This is a story that i recently witnessed all too closely that sheds light on a darker side of korea.but hey,we're not perfect either.Not too long ago i was casually sampling a few sherberts at the local candy shop (aka a bar). sundown.nearing the end of the tastings a few disgruntled korean customers, one 30 something man and two similary aged and average looking women started a minor raucus when they steadfastly challenged the owner, a near eldery woman, that they were overcharged on the bill. the owner promptly double checked and reiterated that the bill was correct.stalemate.story should have ended there but this trio refused to back down or go away.they held their ground and voices began to roar. one of the girls was particularly vocal,noticeably inspired with dutch courage.the guy was equally stubborn but more controlled in his speech and of far fewer words.standoff.within minutes, any remaining chance of peace morphed into a ugly hardcore verbal wrestling match, without the script.the "ugly" korean woman was particularly abusive in her verbal attack on the older lady in a way which makes shane warne look like a perfect gentleman.while i don't understand the language i can read vocal volume, spitting and pointing - kinda like a john mcenroe outburst without the tennis racquet. lowdown.enter the young cook, a slight and slightly hunchbacked korean, nobly left the kitchen to bolster the home team.the 2 boys went outside.showdown.the next thing i saw was the cook stumbling back inside with a hole in his head the size of a golf ball and a trail of blood flowing from his temple at a worrying pace.a sickening sight,ostensibly the product of a glass bottle.takedown.the elderly lady voluntarily hit in the ground in an almost half faint/half statement and hysterically flapped her armed and legs about like a upturned beetle. tough to watch but she still had a element of control about her drama, and in fact i saw this same move on a tv drama several weeks later.laydown.looking at the growing pool of blood and the tears of the elderly lady set off my compadre, a 55 year a jolly,fat,white haired white bearded canadian red neck, appropriately named Santa Dave.Santa Dave had seen enough and quite liked this place.he shot a volley at the guy if he wants a war he's got one. nexts he fires at the witch "shut up." she snaps back with "i don't speak english" to which santa d gives her a free spelling lesson "B-I-T-C-H".putdown.Then he turns his attention to her male companion."look at this" gesturing at the ugliness of the scene."what's it all for?" he charged. "She overcharged me!" came back the original male antagonist."how much?"The most illuminating words spoken all night was the korean warrior's reply:"10 bucks." shakedown.Santa was in a festive mood and returned with "U f'n kiddn me - i'll give u 20 to f off right now!". "principle" came the korean reply.no backdown.Upon his offer to buy the group out from the premises being swatted down Dave promptly issued the staunch korean with one word "outside".meltdown.the most surprisingly thing was the korean dude held his ground.didn't move.despite possibly nearly killing someone, an ambulance on the way,the police probably likewise, and now he's been challenged by a man mountain of a guy who belies his 55 years.he hesistantly but not uncooly rebounds with, "this will be your grave" and made a series of phone calls with the air of a call for reinforcements. Santaty prevails on santa d and he calls the cops. calm down.ambulance arrives for the cook, a husband for our lady manager to relieve her after an enduring night and the police for the terrible trio.downtown.end of chapter but i think there's some sort of message about principle and korean culture in there.

You can't take it with you!

In lieu of the myriad draft posts I have not finished, I give you my greatest success of the week: 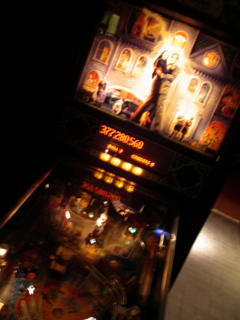 389,000,000 odd! All 12 mansion rooms! 3 extra balls! Tour the Mansion! 3 Replays and 6 free credits! Such success! The barman commented! And he works there! Highest Score! Grand Champion!

All I need now is to conquer the king of Pinball: The Twilight Zone.
Posted by skander at 11:35 am No comments: